Adidas's contribution to the fight against plastic...

As part of our #plasticfree campaign, I have been intrigued to see how various companies across the globe both small and corporate have been doing their bit to reduce their use of plastic.

I love Fearne Cotton- I mean proper girl crush- so I was delighted to see she is supporting the latest campaign by Adidas- their new incredible initiative! Shoes made from plastic that has been collected from the ocean. Genius! 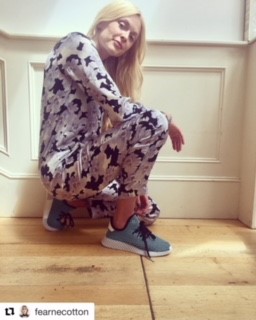 Parley For The Oceans is Adidas' partner in the Parley A.I.R Strategy, which turns ocean plastic waste into thread that is woven into running shoes. The Adidas-Parley shoe silhouettes were re-designed with knitted uppers and decorative stitching, all made from recycled plastic that was collected by Parley for the Oceans from polluted coastal regions. The outsole is crafted from recycled and re-ground rubber.

Adidas has additionally worked with Parley For The Oceans to create mass produced performance football products with the debut of the Adidas x Parley Real Madrid and FC Bayern Munich home jerseys collaboration. As part of their collaboration Adidas and Parley For The Oceans held the "Run for the Oceans" event in summer of 2017, with the intention that this would raise awareness of their products as well as ocean conservation.

Here are the problems our Oceans are facing.....

A massive amount of plastic rubbish ends up in our oceans every year. The ocean currents have formed five gigantic, slow moving whirlpools where the plastic collects, nicknamed Vortex. Recent studies indicate that at least 5 trillion pieces weighing over 250,000 tons are now floating in the world's oceans. The majority of the plastic debris sinks or remains in the Vortexes, however a significant percentage of it washes onto our coastlines daily.

The oceans give us life. We give them plastic. Let’s invent our way out of this. Together.