In a recent tragedy for marine mammals who are being increasingly harmed by our plastic waste, a pilot whale has died in Thailand after consuming a shocking amount of plastic debris.

The pilot whale struggled for five days to stay alive in Thailand near the Malaysian border after rescuers found it with 17 pounds of plastic bags in its stomach, but it ultimately succumbed to its illnesses.

The whale died and an autopsy discovered what Thailand’s Department of Marine and Coastal Resources said were 80 plastic bags lodged in its stomach. 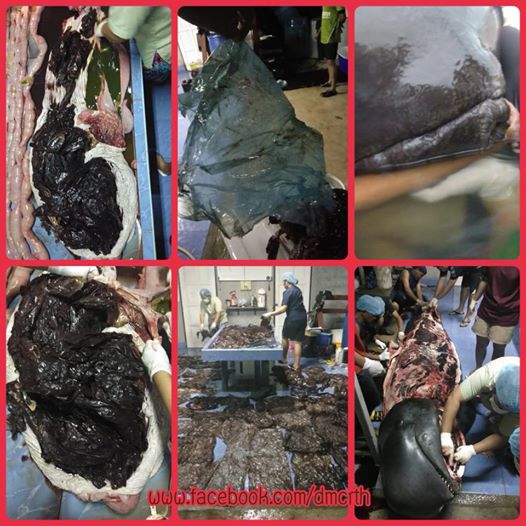 At least 300 marine animals perish in Thai waters annually after ingesting plastic, which humans dump in huge quantities into oceans worldwide and can take hundreds of years to disappear completely. Much of the rubbish is swept around for lengthy amounts of time, putting marine life that may swallow or get entangled in it at risk, and when it breaks down into smaller pieces it can pollute the ocean with both massive clouds of tiny “microplastic” and harmful chemicals. It is believed that a significant amount of the rubbish ends up at the bottom of the ocean, with incompletely understood effects on the marine ecosystem (that are probably not good).

A 2014 study concluded at least five trillion pieces of trash were in the world’s oceans, with 270,000 tons of large and small plastic debris near the surface. More recent estimates look even less flattering for human stewardship of the environment, with a 2018 study concluding the Great Pacific Garbage patch alone is believed to contain up to 87,000 tons of plastic.

Having visited Thailand myself I have witnessed it first hand, it is shocking to see the amount of plastic that is consumed and wasted on a daily basis, the Gulf of Thailand is one of the many waters around the world with a particular abundance of plastic pollution.